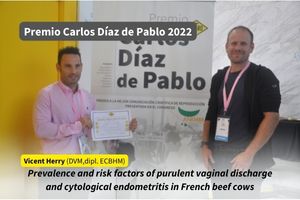 The primary objective of the study was to determinatethe prevalence of purulent vaginal discharge (PVD) and cytological endometritis (CE) in French beef cows and to find out cow-related risk factors associated with PVD and CE.

A secondary objective was to evaluate the performance of leukocyte esterase test strips for the diagnosis of CE.

This prospective cohort study was conducted in 6 herds of Charolais and Blonde d’Aquitaine breeds from December 2020 to April 2021 in the region of New Aquitaine in France. The cows included underwent a thorough examination of the reproductive tract at 30 ± 15 days post-partum that consisted in chronological order of i) a visual observation of vaginal mucous secretion using the Metricheck device (Simcro Technology, Hamilton, New Zealand) ii) endometrial sample using a double-protected cytobrush, iii) ultrasonographic examination in order to determine the diameter of the cervix, the presence of the uterine contents and to describe the ovarian structures.

Immediately after the endometrial sampling, the cytobrush was gently rolled onto a microscopic glass slide which was subsequently colored (May-Grünwald-Giemsa) in order to determine of the percentage of polymorphonuclear (PMN) leukocytes.

The cows were also blood sampled between 30 to 15 days before the expected date of calving and between 7 and 24 days after calving to determine the blood concentration of non-esterified fatty acids (NEFA) and beta-hydroxybutyrate acid (BHBA) respectively. The body condition score (BCS) was determined before calving and at the time of reproductive examination. Some additional data regarding the calving (degree of assistance or caesarian section), post-calving diseases (uterine prolapse, retained fetal membranes, puerperal metritis) or the calves (twinning, birth weight, vitality after birth) were gathered. Risk factors associated with PVD or CE were identified using multivariable logisitic regression.

No association were found between occurrence of PVD or CE and the breed, the herd, cervix diameter, pre-partum blood NEFA concentration, post-partum BHBA, BCS at calving or BCS variation around calving or the presence of a corpus luteum at the time reproductive tract examination. The percentage of PMNs varied positively with the PVD score, but the correlation between PVD and CE was not significant. The leukocyte esterase test was significantly correlated with the % PMNs, and using a threshold of 6% PMNs for the definition CE, the sensibility, specificity, positive predictive value, negative predictive value of the leukocyte esterase test was 0.64, 0.66, 0.60 and 0.69 if the result is “≥1+” and 0.31, 0.94, 0.81 and 0.63 if the result is “≥2+”. Besides PVD or CE was not correlated with noticeable ultrasonographic changes of the uterine contents.

Prevalence of PVD was not previously reported in beef cows and appeared lower than observed in dairy cows. Cytological endometritis, which is not strongly correlated with PVD is much more prevalent in this study than previously reported. Beef cows that gave birth to heavy calves or suffered post-partum disease (uterine prolapse or retained fetal membrane in this study) might benefit a thorough evaluation of “uterine health” before the breeding period because they have higher risks to be affected by PVD or CE. In comparison with conventional cytology, the performance of reagent leukocyte esterase strip as an alternative test was relatively moderate to good.