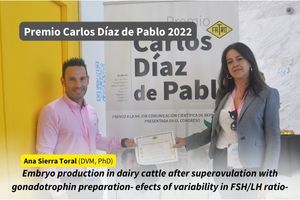 Ovarian superstimulation of dairy heifers and cows is a practical tool to increase offspring from females of high genetic merit. The success of superovulation and embryo recovery in cattle depends on numerous factors but one of the most significant limiting factor has been the high between-individual variability, in the ovarian response to gonadotropin stimulation. (Mikkola & Taponen, 2017).

Currently the gonadotrophins preparations approved for veterinary use derive from porcine and ovine pituitary tissue. One of the disadvantage resulting from the nature of the origin of the products is inconsistency among batches. This variation in bioactivity affects embryo yield (Kanitz et al. 2002).

The more important question is the possible biological effect of the so called FSH/LH ratio. Variability in FSH:LH ratios among different batches of one product of commercially available gonadotrophins is a very important challange that deserves to be considered. Because of this, the objective of this study was to compare the outcome of embryo recovery after superovulation with purified porcine pituitary extracts with different FSH:LH ratios, using a standard protocol of eight injections in a decreasing dose in cows and heifers.

Superovulation was induced by eight intramuscular injections of gonadotrophin preparation, at 12-hour intervals over 4 days. Declining doses of 650 to 800 IU in total was administered for cows, whereas heifers received 450 to 600 IU. Embryos were collected 7 days after inseminations by transcervical uterine flushing according to the IETS guidelines.

Donors were randomly divided into three groups (I, II and III), according to treatment they had received because of different FSH:LH ratio in follicle-stimulating hormone preparation:

The number of viable and quality 1 embryos recovered resulted in significantly increased in donors stimulated with a batch of gonadotrophin preparation in which
FSH:LH ratio was ≥ 1 respect to those obtained from females superovulated with a batch which ratio of FSH:LH was < 0.9.

These results suggested that relative high LH contamination in gonadotrophin preparations impairs the ovarian response to superstimulation, resulting in decreased yield of viable and quality 1 embryos.